The focus of the 1996-2002 Coweeta LTER research was to investigate the complex interactions of natural disturbances and human land use across a range of scales. Within the southern Appalachian Mountains, these effects interact with steep environmental gradients to produce complex spatial patterns and temporal dynamics that are present in the individual, population, community, ecosystem, and landscape levels. The Coweeta Basin has over a 60 year history of ecosystem research that provides invaluable baseline information and whose past results coupled with our society's needs have led the current direction of inquiry.

Superimposed on these disturbed landscapes are strong environmental gradients (ie. changes in temperature, vegetation, wind, etc.) which occur in response to variation in elevation, topography, aspect, and soils. For example, at Coweeta, mean annual temperature decreases by almost 5 degrees C from lower to higher elevations, while precipitation increases by 30 percent. These gradients cause a difference in forest communities along topographic and elevational gradients. Temporal variation can also be substantial. For example, in the mid-1980's Coweeta experienced a record drought which resulted in the death of a large number of canopy trees. Taken together, spatial (ex. canopy gaps) and temporal variation in environmental driving variables creates a complex pattern. Some sites, because of their position along environmental gradients, are more prone to certain disturbances (i.e. ice damage occurs more frequently at cooler and higher elevations, windthrow is more likely on exposed slopes, drought mortality is more frequent on ridge sites and on coarse textured soils, and fires are more likely on dry, warm, low-elevation southern exposures).

In combination with these natural disturbances and environmental variation, southern Appalachian ecosystems have been substantially influenced by humans for at least the last 6,000 years. Our activities have altered the atmospheric environment (i.e. acidic deposition and ozone) which has affected both aquatic and terrestrial ecosystems. Fire exclusion, the extirpation of large predators, the introduction of non-native species, and direct and indirect manipulations to increase and maintain high populations of game species such as deer, grouse, turkey and trout, have further changed these ecosystems.

To understand how this variation effects populations and ecosystem processes, we are continuing to use a combination of long-term measurements, experiments, and modeling to characterize temporal and spatial variation in environmental conditions and interactions with disturbance from the plot to the region. As we continue to expand our research effort to the entire southern Appalachian region, we hypothesize that land use is more important than environmental heterogeneity in influencing populations and processes.

Initiative II: Effects of Disturbance and Environmental Heterogeneity on Populations and Communities 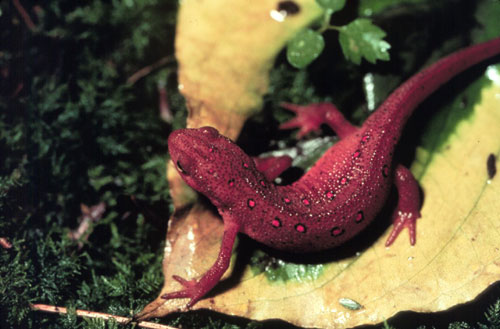 Summary: All studies are linked by the common goal of understanding the causes and consequences of disturbance and environmental heterogeneity for the population and community ecology of animals and plants in both terrestrial and aquatic ecosystems.

The re-emergence of meta population dynamics, the development of spatially-explicit population models, and the importance of spatial distributions for conservation ecology are key issues in the ecological literature. At the regional scale (II.A and II.B), we focus on how human land use affects diversity of terrestrial and aquatic communities and to develop predictive models of potential future changes.
These studies incorporate spatial variation in factors as diverse as soil moisture, foliage chemistry, forest community composition, and stream substratum disturbance. They further measure the responses to disturbance and environmental heterogeneity in organisms as diverse as small mammals, fish, birds, insect herbivores, oribatid mites, vegetation, and stream invertebrates. There are fundamental questions in common to all of these projects, and together they address the overall importance of a spatially-complex environment for the population and community ecology of species in general, within the overriding theme of natural and anthropogenic disturbance.

Initiative III: Effects on Biogeochemical Cycling and Ecosystem Processes
Summary: Understanding biogeochemical cycles and ecosystem processes in both terrestrial and aquatic ecosystems has been a key element of Coweeta's LTER research activities.

Early research emphasized the role of severe disturbance (e.g. clearcutting, drought) and the resultant impacts on nutrient, carbon, and hydrologic cycles. In the most recent past, we investigated the role of environmental heterogeneity, disturbance/stress, and their interaction in regulating ecosystem pools and processes in streams, riparian zones, and forests. The research of today includes continuation of measurements of select topics initiated and new research which builds on past studies. Our approach is to address ecosystem process response to environmental heterogeneity and disturbance/stress at several spatial scales: in plots, in watersheds, in landscapes (Coweeta basin), and in the southern Appalachian region. This will be accomplished through an integrated program of long-term field measurements, experimentation, and modeling.

The 2002 - 2008 research program was an interdisciplinary effort integrating ecological and socioeconomic components across 54,000 km2 of the southern Appalachian Mountains, a bio-geophysical and socioeconomic region in which evolutionary and historical processes converge (Whittaker 1956, Markusen 1987, Barnes 1991, Kretzschmar et al. 1993, Bailey 1996). The research objectives was to advance scientific understanding of the spatial, temporal, and decision-making components of land use and land-use change in the southern Appalachian Mountains over the last 200 years, and forecast patterns emerging in the next 30 years. Our guiding hypothesis was that the frequency, intensity, and extent of land use represents human decision-making in response to socioeconomic and bio-geophysical conditions with consequences that cascade through ecosystems.

Our prior research demonstrated that current ecological conditions, including aquatic and terrestrial community structure, nutrient pools, and water quality are not explained without considering past and present land-use. Understanding the causes and consequences of land-use change is a critical research challenge at both national and global scales (Turner et al. 1996, Vitousek et al. 1997, Dale et al. 2000, NRC 2000).

Initiative I: Characterization of the Socio-Natural Template
Research activities in this Initiative focus on collecting coarse grained information on the spatial and temporal variation in factors relevant to land use and land cover change, environmental gradients, and disturbance regimes (Geoghegan et al. 1997, Koning et al. 1999, Clark et al. , Endre and Green 2000, Grimm et al. 2000).This information will be used to identify driving variables for research activities in Initiative 2 and Initiative 3.

Initiative II: Ecosystem Responses to Variation in the Socio-Natural Template
Ecosystem responses are often subtle and can take decades or centuries to be observed (Webster et al. 1992, Swank et al. 2001). Coweeta researchers have used short- and long-term studies since the 1930s to document the interactions between aquatic and terrestrial systems, within-watershed processes, and the regulation of ecosystem structure and function across southern Appalachia (Webster and Meyer 1997). Understanding is nevertheless limited about how distribution and productivity of forest species is linked to underlying causes, or how different land uses and land-use changes cumulatively affect water quality, quantity, and aquatic biota. This constrains efforts to forecast future ecosystem responses or execute management strategies that anticipate the most likely outcomes from established trajectories of change. In Initiative 2, we are developing specific understanding about tradeoffs underlying ecosystem responses to variation in the socio-natural template. We do this by combining long-term baseline studies with new studies testing key hypotheses about the effects of anthropogenic drivers on ecosystem processes, and mechanistic controls on forest form and function.

Initiative III: Forecasting Ecosystem Responses to Variation in the Socio-Natural Template
Summary:  Our goal in forecasting was to incorporate the complex interactions between socioeconomic and bio-geophysical components of southern Appalachian ecosystems, and reflect the temporally and spatially explicit linkages between land-use legacies and watershed processes.

Research in the Coweeta LTER program has linked land-use changes and legacies to their ecological consequences for the distribution of habitats and species from plot- to landscape scales (Turner et al. 1996, Bolstad et al. 1998, Clark et al. 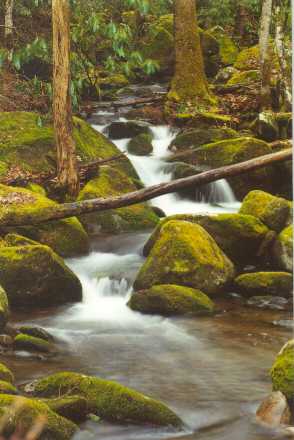 1998, Pearson et al. 1998, Wear and Bolstad 1998, Grossman et al. 2002). In the proposed research we will construct explicit forecast scenarios drawing from our observational data networks and experimental research to move from hypothesis testing to real-world applications that could include conservation planning (Baker 1989, Bender et al. 1998); landscape management and design (Baskent 1997); and the assessment of potential changes from land development or climate change (Baker et al. 1991, Nielson et al. 1992, He et al. 1999). Basic research at fine scales, which is a critical step in generating the scientific knowledge for building scenarios and modeling, seldom provides the requisite knowledge on interactions and processes required for planning and decision-making (Carpenter 1996, Clark et al. 2000).

Several useful attempts have been made to link social factors to deforestation and forest cover change (Wilkie and Finn 1988, Baker 1992, Dale 1994, Gilruth et al. 1995, Gaston et al. 1998). However, land-cover change is typically used as a surrogate for land use so that the result is more properly a landscape–transition model (Dale and Rauscher 1994). Research by Coweeta investigators integrating ecological and socioeconomic factors within a probabilistic framework (Turner et al. 1996, Wear and Bolstad 1998) have already taken the first step toward incorporating decision-making to forecast models to make them more realistic of the process of change. We will take the next step in the proposed research by focusing on the development of forecasts that incorporate feedbacks between ecological and socioeconomic modules (Lee et al. 1992, Riebsame and Parton 1994).
Our proposed efforts will focus on the conceptual and technical integration of research results from Initiatives 1 and 2, since the current trend in forecasting is clearly toward multiscale, multi-process models. Our goal in forecasting is to incorporate the complex interactions between socioeconomic and bio-geophysical components of southern Appalachian ecosystems, and reflect the temporally and spatially explicit linkages between land-use legacies and watershed processes. Research activities in this initiative will concentrate on the Little Tennessee and French Broad drainages where we have the greatest control (and information) over temporal, spatial, and decision-making processes. This will provide us with the greatest assurance that our forecast scenarios incorporate our best scientific understanding. Since important questions remain unresolved about the necessary content or validation of forecasts, we will carry out limited empirical validation of the model through studies of the response-trajectory of streams to changing land-use, how stream systems respond to contrasting rates of suburbanization, and the social valuation of specific land management goals.